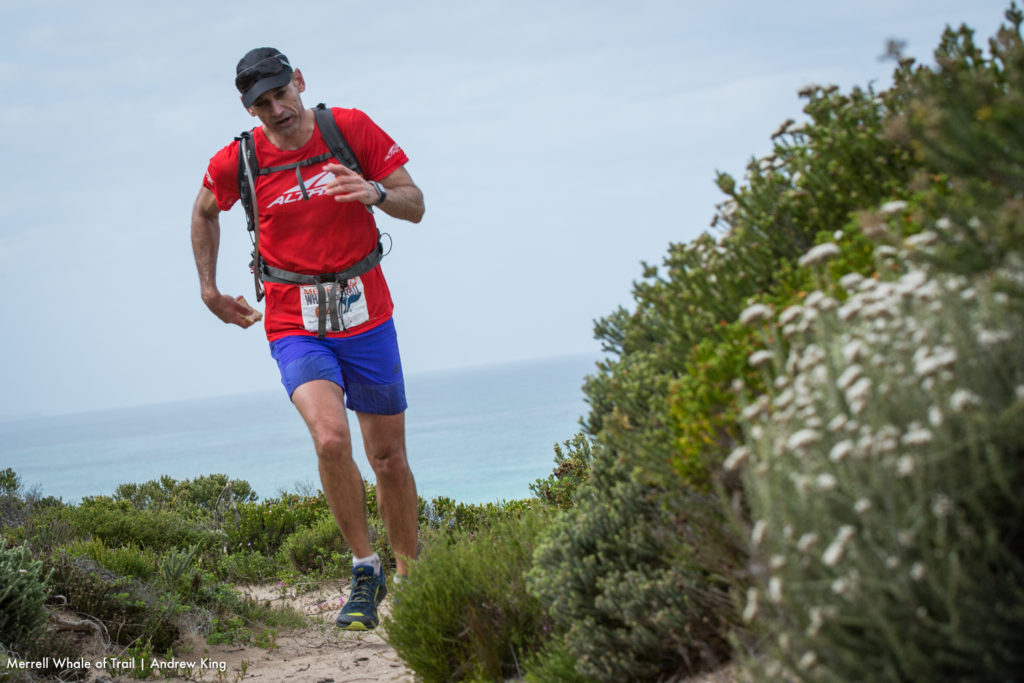 Tips for a PB

The Whale of Trail starts at Potberg Environmental Centre, and bottlenecks the entire field onto single track immediately. To avoid overcrowding the organisers introduced a lap around the Centre first, so if you’re keen to get up front early on – then best you Wayde van Niekerk the first lap to get a good position on the single track. “If you want to be up ahead with the racing snakes, it is worth putting the foot down for the first kay – the start can be quite bunched up and there is a bit of a bun fight to get to the single track,” says Karoline Hanks, 2nd lady in 2015 and 3rd lady home in 2016.

Take the downhills with caution

“Take the first long downhill really easy,” says Chad Gordon, 2016 men’s winner. If you get over-excited early on and pummel your legs on the downhill it’ll cost you in the second half of the race.

Keep momentum while you can

“The first half of the run is also on easier terrain to run a good steady pace, but once you hit the beach and the soft sand you tend to lose a lot of momentum, so make it count when you can,” says Tracy Campbell, 2016 women’s winner. Ask any elite that’s run the Whale of Trail and they’ll say the same thing – the beach slows you down to a walk! So run the runnable sections and walk the beach to be as efficient as possible on the day.

The route profile may be deceiving and the undulating coastal paths (with a slight camber) are relentless and can derail your plans. “Go easy on the coastal paths – they take it out of you and you will find yourself passing many who have pushed too hard at the start…Do remember to push just before Vaalkrans (the final CP5) and the kit check to avoid having to queue,” says Hanks. 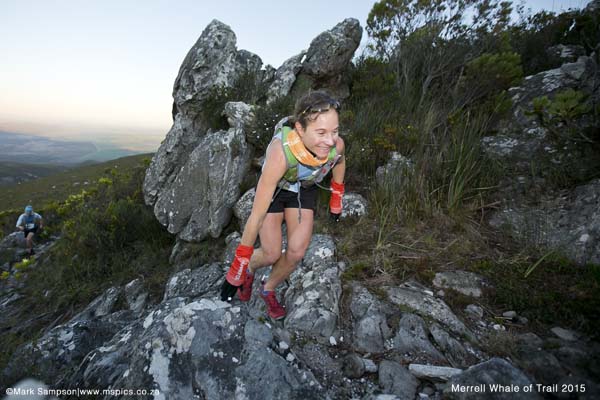 “Eat consistently and eat well,” says Hanks, “and don’t wait until it is too late. I have seen elite athletes completely finished (and walking) on the beach section, nauseous and unable to take anything in.” Similarly, Gordon highlights the importance of a good nutrition plan before and during the race. “Nutrition is vital because if you run out of gas, that’s basically it!” Gordon believes that nutrition starts before the race, so take his advice. “Be prepared by pre-planning and eating an easily digestible breakfast (at least two hours before the start),” he says, “as well as having lots of nutrition easily available throughout.”

“Don’t skimp on water,” says Hanks, who has run out of water on this particular event before, “especially for the coastal stretch. The salty wind can take it out of you and you can be incredibly parched very quickly.” According to the CP’s and water tables, ensure that you full up at WP1 before Noetsie, and then again at Hamerkop hut before CP4 and the second WP. You might have to walk up to the hut to full up, but it will be worth it to stay hydrated.

There is still enough time to adapt and increase your training to suit the demands of the Whale of Trail. Be sure to take the following advice from the pros by trying to incorporate some of the following training that will prepare you for the 53km. “Remember it’s a distance event and you need to train for the distance,” says Gordon, “so short fast work is not essential unless you have done all the long hard work.”

It’s also a good idea to mimic some of the terrain to get your body and thus muscles used to expectations. “Train on soft sand by doing at least one beach run a week if you can,” says Campbell. “Also try to incorporate some stair training into you weekly routine, to help you with the undulating coastline. Strength work, like squats and lunges, will work to improve your power, which will help you for that final eight kay push on soft sand.”

And lastly, a sneaky tip from Karoline Hanks regarding gear that will make or break your day: wear gaiters! “The sand can be draining, but take it steadily, make keeping the sand out with gaiters will avoid nasty blisters forming and thus very painful running,” says Hanks.